Gelish Vs Shellac: What’s The Difference Between Gelish And Shellac?

Well, first of all, Gelish is a brand that manufactured the first-ever gel nail polish to be released to the market in 2009. And Shellac is known both as a general term for gel nail polishes and as a specific gel nail polish brand named CND Shellac. The biggest differences between Gelish and Shellac are the nail prep process, longevity, bottle sizes, number of colors, and availability. Here is more info about their similarities and differences.

I may earn a small commission from links on this page at no extra cost to you, but I only recommend products I really love.

However, shellac is also used as a general term referring to any similar UV gel nail polishes.

Gelish was the first gel nail polish to be released to the market but Shellac quickly followed.

Since it was released by CND, a huge and popular manufacturer of professional nail products, and was widely advertised, promoted, and distributed, it quickly became a household name and an umbrella term for all gel nail polishes.

It happened in the same way as when Xerox, Kleenex, and Band-Aid became general terms.

So many people now call all gel nail polishes shellacs.

Shellac was named after the resin secret obtained from lac bugs because it’s also a tough and durable lacquer.

But contrary to popular belief, there is no lac bug extract in shellac polishes and polishes sold under the Shellac brand. They are completely vegan. 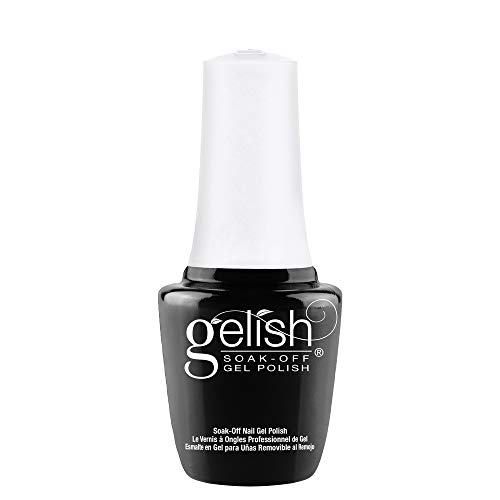 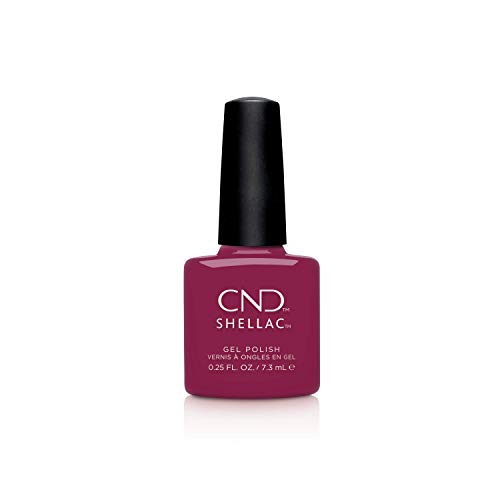 Not only both Shellac and Gelish are the two most popular brands of gel nail polish, but they are also pioneers of the nail industry.

Gelish was the first-ever UV/LED lamp curable gel nail polish available in a bottle and with a brush. It was released in 2009. Which was a revolution at the time.

Shellac was also one of the first gel nail polish brands, introduced by CND (Creative Nail Design) in 2010. It was a UV-only polish back then.

What Shellac and Gelish have in common

They both are UV gel nail polishes

Both Shellac and Gelish contain photoinitiators that absorb UV rays and start the polymerization reaction that makes the polish harden.

That’s why they both need to be cured under a UV lamp.

Both can be cured by an LED lamp too

However, the range of UV rays LED lamps emit is smaller than the range of rays emitted by pure UV lamps that contain special UV lightbulbs.

That’s why LED lamps sometimes can’t cure certain gel polishes and builder gels because they require UV rays that fall outside the spectrum of what LEDs emit, while UV lamps are absolutely universal and can cure any gel polish or gel.

Shellac used to be a polish that could only be cured by a UV lamp.

Later it was reformulated and is now perfectly curable by LED lamps too.

Gelish has always been an LED-friendly gel nail polish. As I’ve already mentioned above, it was the first LED polish on the market.

These are high-quality premium products that are used by nail technicians in nail salons.

These polishes are long-lasting, cure fast, go on smoothly, and have a huge range of colors.

That’s why they’re so popular.

Gelish and Shellac require a base coat and a top coat

Gelish and Shellac are 3-step polishes that need a base coat underneath the color layers and a top coat to finish off the manicure.

It’s recommended that you use matching base coats and top coats made under the same brands.

Both Shellac and Gelish manufacture excellent base coats and top coats that are formulated to work with their own polishes perfectly.

Easy to soak off

Both Gelish and Shellac can be removed in 10-15 minutes by soaking them off with acetone.

They don’t need to be filed with a nail drill.

Have a large color range

Both brands have a huge number of colors in their palettes.

So nail technicians who work using these brands have tons of hues to choose from.

Plus they release new collections and colors every season.

The colors are really beautiful and well-pigmented.

Most polishes go on fully opaque in 2 layers. Some sheer colors may need an extra third coat.

But Gelish has more colors released to date than Shellac.

Have a no-light sister polish 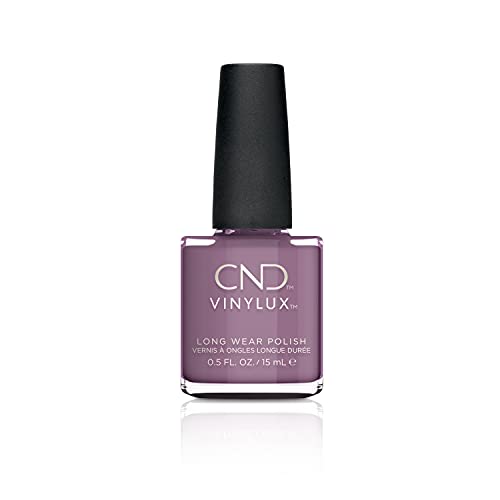 It’s a no-light gel nail polish that can be cured without a UV lamp. It just air dries like regular nail lacquer.

However, it is a long-lasting polish that can stay on your nails for 7-10 days, which is a lot more than the longevity of regular lacquer.

In addition to that, Vinylux doesn’t need a base coat or any nail prep. You can apply it directly to your bare nail plate. But it does require a top coat.

Vinylux has an identical color palette to Shellac.

This is super-convenient because you can use this polish for quick touch-ups of your Shellac manicure instead of redoing a whole nail when the corners chip.

Vinylux colors have the same names as Shellac hues.

This makes it easier to find a matching Vinylux polish for any Shellac color. 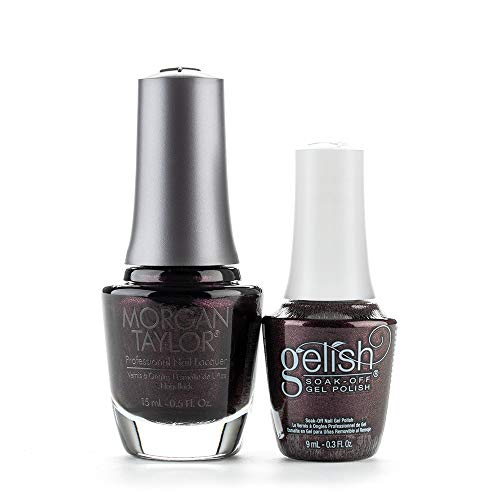 They come in the same colors as Gelish polishes and match them perfectly too.

Both Vinylux and Morgan Taylor are non-toxic and free from Formaldehyde and Toluene. Plus they are cruelty-free.

What’s the difference between Gelish and Shellac

CND promises that their Shellac gel nail polish will last for at least 14 days.

And according to Gelish, their gel nail polish can last up to 21 days or even more, provided that you’ve applied it properly.

So Gelish is a longer-lasting gel nail polish than Shellac.

But this comes at a small cost because Gelish has a longer nail prep process than Shellac.

One of the biggest differences between Gelish and Shellac is the nail prep process.

Gelish requires nail plate roughening before application. This is done by buffing the shine off the natural nail plate.

And Shellac’s manufacturer emphasizes that you don’t need to roughen your nails before its application and can simply start with the base coat.

This makes the application of Shellac a bit easier.

In addition to that, Gelish manufacturer Nail Alliance specifies that you need to dehydrate the nail plate to make the polish adhere better.

Gelish has released an excellent nail dehydrator and bonder called Gelish pH Bond and recommends using this dehydrator with their own polishes.

This product de-oils the nail plate and makes the base coat and polish really stick.

This is why Gelish can stay on your nails for 3 weeks or more.

pH Bond is available as part of the brand’s best-selling Fantastic Four kit that also includes the base coat, top coat, and cuticle oil. 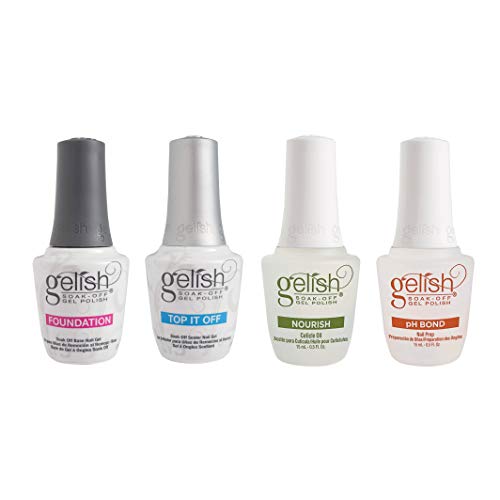 Shellac doesn’t specify that you need to dehydrate the nail plate. So it’s an optional step.

However, it’s also recommended that you use a nail prep dehydrator.

This will drastically improve the longevity of the polish and can make it last well over the promised 2 weeks.

It doesn’t have any mini versions available.

And Gelish is available in 15 ml full-sized bottles or 9 ml mini versions.

So even miniature bottles of Gelish are larger than Shellac’s standard bottles.

And regular Gelish bottles are twice the size of Shellacs.

By the way, Shellac Luxe comes in 12 ml bottles that are larger than standard Shellac bottles.

Gelish is often sold in themed sets. Some of them are seasonal and some are named after popular culture symbols, like Disney characters, MTV, and Marylin Monroe. 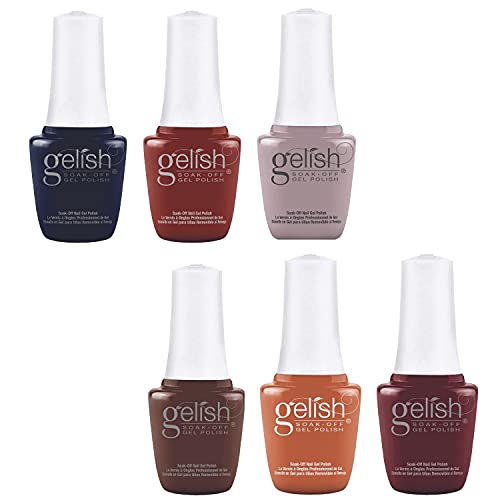 Shellac is not usually available in sets to the general public but salons can buy it in bulk as whole collections.

Even though both polish brands have extensive color ranges, Gelish has released a larger number of hues than Shellac.

Today there are 192 colors of Gelish gel nail polish, as opposed to only 160 CND Shellac hues.

CND also retires some popular colors from time to time.

Shellac is not as widely available as Gelish.

It’s often only sold to nail professionals that have a license.

So it can be hard for an at-home gel nail polish user to purchase Shellac.

It’s also not too budget-friendly.

While some of their professional products, like polygels, are often sold only to licensed professionals, most of their gel nail polishes can be bought in consumer stores, including online stores.

Difference between the matching sister lacquers

The matching lacquers from Gelish and CND also have some differences.

While Morgan Taylor and Gelish polishes are available in duo sets, Shellac is usually not sold together with Vinylux but you can buy them separately.

Morgan Taylor is not a no-light gel nail polish and is not as long-lasting as Vinylux.

However, you can extend its longevity by using Morgan Taylor Make It Last long-wear top coat, although the use of a top coat is not required. Whereas Vinylux won’t stay on as well without the top coat.

Unlike Gelish, which is always a 3-step polish system with a base coat, top coat, and color polish, Shellac is also available as a 2-step polish named Shellac Luxe.

this product only includes a color polish and top coat and doesn’t require a base coat.

The base coat is actually mixed in with the color polish formula.

In addition to that, Shellac Luxe is formulated for speedy removal.

You can soak it off in 60 seconds, which is amazingly fast.

Shellac vs Gelish: pros and cons

How To Use Sally Hansen Miracle Gel Nail Polish And Top Coat: Full Review And How Long It Takes To Dry Report

We use cookies to ensure that we give you the best experience on our website. If you continue to use this site we will assume that you are happy with it.OK